Past Film/Video | The Box

A still-timely consideration of a foundational national document, Bear in Mind (Bill of Rights) uses strategies of interpretation, translation, and performance to reveal the basic meaning of the US Constitution’s first 10 amendments.

Artist and Ohio State professor Alison Crocetta’s video was made in collaboration with American Sign Language (ASL) interpreter M. Charlene McCarthy, who is featured signing onscreen. While ASL is most often used to interpret spoken language for hearing-impaired persons, in this video it’s utilized as a gestural language to embody the spoken word for hearing persons as well. McCarthy wrote a "gloss" of the Bill of Rights in preparation for her act of interpretation, which she reads aloud in the video’s soundtrack. In this unconventional choice, the “gloss”—the document written by an interpreter to parse out a complex legal or technical text—takes center stage. The ASL gloss for the Bill of Rights used here is poetic and accessible in its syntax, a distillation of amendments that have become ever more contested with time.

Made through a residency in the center’s Film/Video Studio in 2006, Bear in Mind was conceived after 2001’s 9/11 attacks, a time when a variety of rights in the US were under threat. As Crocetta recounts:

“I became painfully aware of the National Security Entry-Exit Registration System (NSEERS) that required men over the age of 16 (from mostly Muslim cultures) to register with the Department of Homeland Security. This situation harkened back to dark days in American history such as the Japanese internment camps during World War II and prompted me to consider a work that could mirror the ever-changing, yet circular, times we are living through.

It is my observation that the majority of politically aware art becomes entwined with its historical context, often to the detriment of its longevity…I worked against this periodization by giving the Bill of Rights a physical, embodied presence as a moving image via American Sign Language (ASL) and spoken word.” (6:30 mins., video)

Bear in Mind (The Bill of Rights)production photo: Bradley Olson.

Alison Crocetta’s hybrid practice includes performance, video, sculpture, and installation. Her work has been performed and exhibited internationally in Brazil, Norway, Germany, and the United Kingdom and in a range of US venues including the The Bronx Museum of the Arts, NY; The Aldrich Contemporary Art Museum in Ridgefield, CT; the MIT List Visual Arts Center in Cambridge, MA; and the Contemporary Arts Center in Cincinnati, OH. Her honors and awards include a 2015 Ohio Arts Council Individual Excellence Award (Interdisciplinary/Performance Art), the 2011–12 Franklin Furnace Fund for performance art, and a 2010–11 EMPAC DanceMovies film commission. Crocetta is currently an Associate Professor in Ohio State’s Department of Art.

Made with the support of the Wexner Center’s Film/Video Studio. 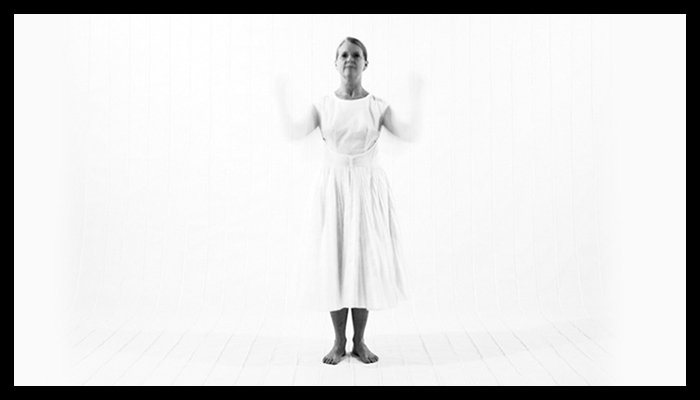 Q&A: Alison Crocetta on Bear in Mind (The Bill of Rights)